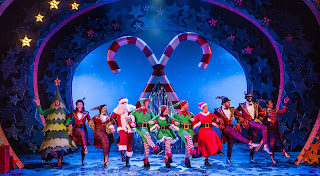 If I wasn't feeling Christmassy before tonight then I certainly am now after seeing 'Nativity The Musical'. I can honestly say it has got to be one of the best shows I've seen and Luke agreed. We saw the first and second movies together on Christmas Eve a few years ago so it was only right that he came with me to see the theatre show.

The creator, Debbie Isitt made this feel-good movie into an adapted stage version. It was hilariously funny and entertaining with lots of singing and dancing.

It's based at St Bernadette's School who are attempting to put on a Christmas show, their teacher Mr Maddens (Scott Garnham) promises that a Hollywood producer (played by Adam Thomas) will come to see the show. The new teaching Assistant, the crazy and very funny Mr Poppy (Simon Lipkin) brings the 'Sparkle and Shine' and puts on a phenomenal show. Luke and I laughed so much during the first half especially at the auditions, some parts were true to the movie and all the children were fantastic.

The scenery and costume changes were quick and impressive and it was like being transported from place to place. So many catchy tunes including some original hits Sparkle and Shine, Nazareth, One Night One Moment and She's the Brightest Star.

It's a great show and I would highly recommend to see it with the whole family, every child wants a teacher like Mr Poppy!

To book tickets go to https://www.atgtickets.com/shows/nativity-the-musical/regent-theatre/