It has been common knowledge for a while now but I've only just managed to blog about it. I'm rubbish, I know!

'Redshift Radio' which was launched online in September last year, has now been awarded a 28-day test licence by Ofcom which starts on Monday 4th April and ends on Sunday 1st May.

We are now a team of 45 presenters and we broadcast 14 hours a day with a variety of community shows, one of these shows being my show 'Toddler Talk'. It's a parenting show offering expert advice and discussions from everything and anything from pregnancy to parenthood, and I'm live every Wednesday 10am till 12pm.

Gavin Hammond and Liz Southall (who I've dedicated a post to before) have worked flat out to get it off the ground and I'm so proud to be a part of this team. Being a sole trader can get pretty lonely so to be a part of a team again is a great boost.

Be sure to spread the word and help to get our local shopkeepers in Crewe and Nantwich to tune in from 4th April on 87.7FM. In the meantime go to www.redshiftradio.co.uk to hear us before we go FM. Please also go to our Facebook Page and 'like' us.

Wish us luck.....and hope to reach you over the airwaves soon!
Posted by Sharon at 13:13 No comments: 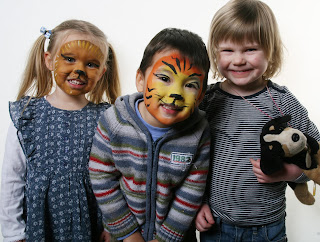 It was the Family Movie Event at Malbank School today, showing 'The Lion King'. We had over 100 people through the door which was pretty good going considering we were not allowed to advertise it as such due it being a community not-for-profit event. I used Facebook and my class contacts to promote the movie and I'm so pleased at how popular it was.

I offered face painting and asked for a donation for 'The Meningitis Trust' in memory of Charlie Mann who sadly died from Meningitis, all proceeds went to Charlie's fund. We raised £100 which I'm delighted with. Simon J. Newbury Photography photographed the children and offered a print on the day. Above is a photo of Luke and his friends, Chloe & Stella taken by Tina Newbury.

I've already started planning for the next one. It will be on Saturday 2nd April at 10.30am and this time its 'Toy Story' with optional fancy dress for the children.

Go to 'Hullabaloo Kids South Cheshire' on Facebook and 'like' the page and you will receive regular updates of classes and events.
Posted by Sharon at 15:45 No comments:

Today was a real poignant day for me, every Wednesday between 10am and 12pm, I present my radio show 'Toddler Talk' on Redshift Radio.

I had a local lady, Katy Mann as a guest who had lost her 15 week son, Charlie to Meningitis. She is such an inspirational woman and is campaigning hard to raise awareness of this terrible disease to save lives of others. She has been keeping a blog in Charlie's memory and also using Twitter to spread the word, she has also managed to get 200 famous followers to retweet too.

Another amazing woman who appeared on the show by phone was Sophia Mason, who lost her unborn daughter at 39 weeks. Her campaign is 'Chloe's "Count the Kicks" Campaign' on http://countthekicks.org.uk/. Sophia also talked about her battle with Meningitis at 17 when she lost both her legs.

You can hear the interview on the podcast on www.redshiftradio.co.uk

My job on the show is offer advice to parents and I hope I managed to do it justice today.
Posted by Sharon at 22:39 No comments: