SLEEPING BEAUTY - THE PANTOMIME OF YOUR DREAMS 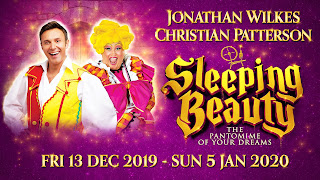 It only starts to feel like Christmas when I see the panto at The Regent Theatre, Stoke, the atmosphere is always buzzing for opening night and you can feel the excitement from both children and adults.

This year's performance is Sleeping Beauty, Luke and I had to google the storyline before we came, and although the original isn't set at Stokey Palace in Stoke-On-Trent, there are still elements of the authentic fairytale.

Local Stokey, Jonathan Wilkes plays Muddles, who is in love with Princess Beauty, his mother, the Royal Nanny is played by Christian Patterson and another regular Kai Owen is King Cyril of Stokey. The comedy timing between the three of them is hilarious. I have never laughed so much during the first half of a panto before, so many clever jokes for all generations and lots of innuendos. Naomi Slights is Princess Beauty and entertained us with her beautiful singing, the Wicked Fairy, Carobosse was played by Vivien Parry, she was a believable baddy who also belted out some well-known songs. Delme Thomas was The Spirit of Stoke who was the king of the one-liners and dazzled us with his sparkly costumes.

As Luke is now getting older, he is beginning to understand the more 'adult' jokes but also finds the slapstick humour hilarious. We love our family outing to the Panto and even hubby got up and partook in the audience singalong!

If you are able to treat your family to the panto this year make sure you see this, you won't be disappointed!

If you and your children are fans of the Madagascar Movies you need to get to the Regent Theatre in Stoke this week to see Madagascar The Musical.

Our favourite characters, Alex the Lion (Matt Terry), Marty the Zebra (Posi Morakinyo), Melman the Giraffe (Connor Dyer), Gloria the Hippo (Hannah Victoria) escape Central Park zoo and find themselves in the Wild where they meet King Julien (Kieran Mortell). The production stayed true to the movie and the bond between the friends was endearing.

For us, King Julien stole the show in the second half singing the iconic 'I Like to Move It, Move It', the whole audience was in stitches laughing and it resonated round the theatre.

The costumes and puppetry was fantastic, especially the famous Penguins of Madagascar. The songs and dancing was entertaining, Matt Terry's voice was amazing! Depending where you sit in the audience the scenery could cause a bit of obstruction so if you haven't bought tickets already choose central seats.

To book tickets for a great family show go to https://www.atgtickets.com/venues/regent-theatre/
Posted by Sharon at 13:10 No comments:

IN THE NIGHT GARDEN LIVE! 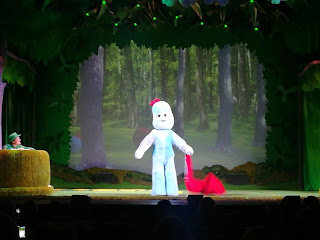 As Luke is getting older (he turned 12 this year) I am getting more nostalgic about his early years. One of his favourite programmes as a toddler was 'In the Night Garden' so when I saw the Live Show was coming to Stoke on its first ever theatre tour I couldn't resist in taking my 3 year old Godson.

The theatre was buzzing with families with babies up to pre-schoolers, there was lots of excitement waiting for Igglepiggle, Makka Pakka and Upsy Daisy and friends. It stayed true to the original tv programme format with the well-known songs and life-size characters and puppets. It was magical to see everyone waving and singing along (me included!)

It was fantastic to see it all all come to life and there were a few little surprises for anyone who is still to go and see it! I'm sure Zak enjoyed it, I know I certainly did!

If you have toddlers who love the show, I highly recommend going. It's on tomorrow at 10am and 1pm Regent Theatre 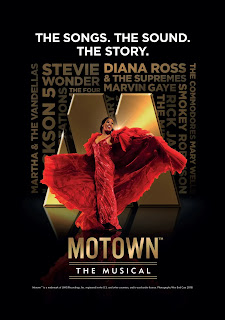 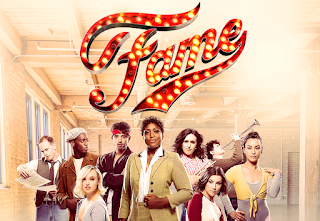 As a family we read the book War Horse by Michael Morpugo and watched the film in preparation for the stage production. I had heard nothing but good reviews of all 3, to see it come alive with puppets was spectacular and captivating. You don't need to have seen the film or have read the book to appreciate the show though as the story is slightly adapted which gave us another topic to discuss on the way home.

The story is set in 1914 and is about the friendship between Albert and his horse Joey who he reared from a foal, they share a special bond which is heart-warming. Albert's father sells his horse to the British Army to support the troops in France, Albert joins the army to go in search of his equine friend.

We were provided with tissues and told to expect tears, for me, there were so many poignant moments in the story and I did need the tissue! The horses were realistic and with their life-like sound effects I soon forgot they were puppets and controlled by people.

There were many 'jumpy' moments so do bear in mind if taking younger children, it is set in the war so I should've expected them really. The scenery was simple but effective, the interactive screen was spectacular.

Yesterday was National Theatre Day, I was asked which was my favourite theatre performance, it's a real tricky question but after seeing War Horse I think it is definitely up there as one of the best.

It's on until the end of the week at The Regent Theatre, book early to avoid disappointment
https://www.atgtickets.com/shows/war-horse/regent-theatre/
Posted by Sharon at 13:52 No comments: 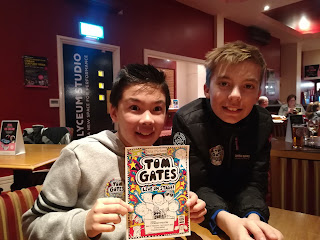 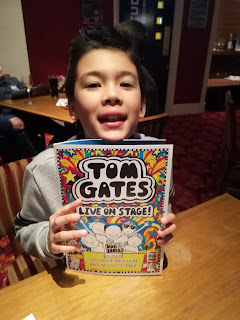 When my now 11 year old, Luke was 7 or 8 he was never a keen reader, so when a friend recommended the Tom Gates books he was enthusiastic and turned into a little bookworm. He also enjoyed replicating the doodles and also introduced him to Caramel wafers!

I was intrigued to see how the books would be transformed onto the stage, I did have a quick read of  a few chapters of one of the books and got the gist of the main characters but you don't need to have read the books as it is a brand new story from the producers of Horrible Histories and Gangsta Granny.

The interactive set was fantastic, so engaging and cleverly done, the doodles were a big part of  the scenery. The car journey was impressive!

Tom is played by Matthew Chase who brings humour to the main character and shows off his talent as lead singer of the Zombie Dogs. Matthew Gordon is best friend, Derek as well as the very comical Grandad, classmates were played by Amy Hargreaves and Ashley Cousins who also doubled up as moody sister, Delia and Granny.

The show is suitable for all ages, there was a great buzz when we left the Crewe Lyceum theatre.