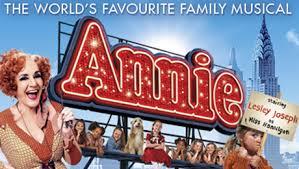 My 8 year old, Luke loves the pantomime and will watch virtually anything on the TV so I was really pleased when he said he would accompany me to see Annie. It was his first proper musical and I know he wasn't disappointed. We watched the original film version only last week to learn the main storyline so of course Luke was making comparisons, as we all do!

Annie is set in 1930's New York during the Great Depression, living a life of torment and misery in an orphanage run by cruel Miss Hannigan her luck changes when she is chosen to spend time with Billionaire, Oliver Warbucks.

Annie played by Madeleine Haynes was superb and did not lose character once, such a fantastic talent, her accent was convincing and singing and dancing all perfect for the role. Her partnership with the other orphans had us captivated and I had a lump in my throat hearing her sing favourites like 'Tomorrow' and 'Maybe'. The saying never work with children and animals was untrue when you saw the connection between Annie and Sandy the stray dog, played by 2 year old Labradoodle, Amber. As a dog lover I would have loved to have seen more of Sandy but was fun to spot him running across the stage.

Playing the part of Miss Hannigan was Lesley Joseph, best known for playing Man-eating Dorien Green in Birds of a Feather. She impressed us with her gin-swigging rendition of 'Little Girls', I never knew she had such a powerful voice. Occasionally her American accent slipped but she was still endearing. 'Easy Street' performed by Rooster (Jonny Fines) and Lily (Djalenga Scott) was entertaining with a wickedness and humour too.

Oliver/Daddy Warbucks was played by Alex Bourne and his pa, Grace Farrell played by Holly Dale Spencer had a charming bond. The dancing was strong by all the cast and it was nice to hear extra added songs to the movie version.

The scenery was a fun and colourful jigsaw puzzle which captivated throughout. Dancing, singing, costumes and humour kept us entertained.

I asked Luke which was his favourite part and his answer was 'All of it'! That is one happy customer!
I would highly recommend for all ages, you will not be disappointed and I guarantee you will be singing in the car on the journey home!

Tickets are now on sale and are available from The Regent Theatre Box Office, by calling 0844 871 7649 or visiting www.atgtickets.com/stoke