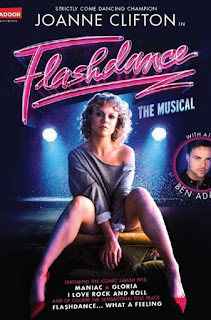 
Joanne Clifton plays Alex, anyone who's a Strictly Come Dancing fan knows she won last year with Ore Oduba and also the Christmas Special with Harry Judd. She is a truly amazing dancer but I wasn't aware she had such a magnificent singing voice and superb acting skills too. I'm always apprehensive when I know the performers have to put on an American accent but  Joanne and the whole of the cast were flawless.
Ben Adams plays Nick Hurley, Alex's love interest and Boss's son. Adams was the lead singer of pop group A1 (who I saw on tour a few years ago!) The chemistry between the two was sizzling and they made a very convincing couple.
The ensemble had many different roles including change of character, costume changes and also doubled up as stage hands. Scenery was switched around the stage creating clever backdrops. The dancing was phenomenal and entertaining.
It is a heartwarming story with a very strong dance routines and emotional songs. It had us up on our feet clapping along to the reprise.
Flashdance  is on until Saturday 30th September. Go to http://www.atgtickets.com/shows/flashdance/regent-theatre/ to buy your tickets now
Posted by Sharon at 13:18 No comments: