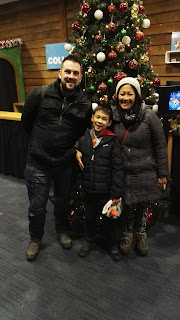 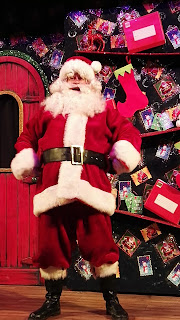 As Luke is now 9, I'm not really sure if this is the last year he will 'believe' so our annual Christmas outing
was all about the experience and not so much about seeing Santa in a grotto and receiving a present.
In the past we've done Chester Winter wonderland, Reindeer Lodge in Ellesmere Port, Hawkstone Park,
Chill FactorE and Stapeley Water Gardens. This year I wracked my brain to find somewhere suitable and as
Luke loves snow I knew he would love Snowdome Tamworth's Winter Wonderland. We booked into the Holiday Inn
Express 5 minute walk from the venue and booked rail tickets to ensure a stress free journey on a Saturday. They
also give a discount if visiting the Snowdome which sadly I only found out after I'd booked!

The hotel was very nice and room was spacious with a sofa bed for Luke. The Snowdome had some lovely Christmas
decorations and a beautiful tree outside. We arrived early to have food before our Winter wonderland experience.
The food hall was heaving but we managed to find a table, ordered our food and it came within 10 minutes.
It was also very tasty and Luke was impressed with his Yeti burger!
Our slot for The experience was at 7.15pm so we queued up and greeted by a very funny and friendly Penguin
character. It was then time to enter the snow. We instantly had a snowball fight, and found a wooden sledge that
Luke was happy to be pulled around the snow in. He went down the slide in an inflatable ring too, he couldn't resist
making snow angels and was soaked by the time we were called to Santa's workshop.
We were entertained with a mini pantomime type show, very funny with lots of audience participation and plenty of
singing. The highlight was seeing Santa do a rap and then the running man.
After the show we were ushered upstairs to see some real reindeer, alpacas, Rabbits, goats, pigs and wrote a letter
to the big man himself, I was quietly hoping they were not going to be any last minute surprises!
It was so magical and I know I thoroughly enjoyed it. Luke said the best bit was the snow and he definitely wants to
go back.
I made a conscious effort not to read any reviews as there are always negative ones. I have no hesitation in
recommending our evening spent at Snowdome Tamworth. In my opinion it was perfect!
The following day, we took the train to visit the German Christmas markets, it was a great end to a fabulous weekend.
Posted by Sharon at 11:09 No comments:

We 'flew' into Crewe Lyceum on Saturday for the opening night of Aladdin, we arrived early to try out Wishee Washee's Street Food which was tasty and good value for money.

I grew up watching Cannon and Ball and saw them on stage when I was around Luke's age, I even had the 'Rock On Tommy' braces! 30 years on (and a bit!) I still found them hilarious and they're clever one-liners and banter had the audience chuckling at PC Tommy & PC Bobby.

Dan Walter of Stage School fame, was a charismatic Aladdin and his partnering with the beautiful Princess Jasmine, Danielle Chupak gave us a convincing romantic storyline. Their dancing and singing enthralled us.

Wishee Washee was played by CBeebies, Sid Sloane, he was great at involving the audience by shouting out 'Hiya Wishee' whenever he walked onto the stage. Their mother, Widow Twankey was the funny Malcolm Lord, the striptease was very funny and I almost had to cover Luke's eyes!

Mark Turnbull was the perfect Panto baddy as Abanazer and his sidekick Scheherazade (my hubby's favourite character!) was Lauren Mobley.

Without giving away too many spoilers, Dooby Duck and his friends put on an impressive show, it has us all captivated.

The costumes were stunning and colourful and it was lovely to see the theatre so full and buzzing.
I hope they sort out the sound issues as there was a bit of reverberation and the music seemed to drown out the singing at times but other than that, I would recommend as a great family entertainment show.

Go to https://crewelyceum.co.uk/Online/crewe-pantomime for tickets. 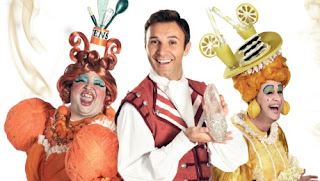