FOREVER JACKSON - LEGACY OF A LEGEND 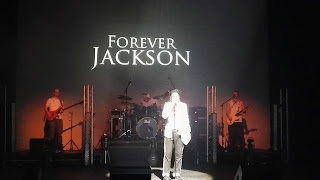 I introduced Luke to Michael Jackson about 2 years ago and he was instantly hooked, I grew up listening to his music and its hard to believe the Bad Album first came out 30 years ago, so when a friend told me that Forever Jackson was coming to Crewe Lyceum I knew I had to get tickets. An even bigger bonus was it was during half term so the late night didn't matter!

It was lovely to see so many other children dressed up as the man himself, don't think Luke would have forgiven me if he was the only one with the black fedora and sequin glove. You could feel the excitement in the theatre waiting for the show to start. It was an amazing atmosphere when Robin Parsons stepped on stage for the first time and opened with 'Wanna be starting something'. His look and his moves were identical to Michael Jackson and it gave me goosebumps as we have watched many videos and live show recordings to compare. My personal favourite is Smooth Criminal and when he performed the 'lean' we were highly impressed.

The costumes were also a carbon copy of the originals, there was lots of quick changes but we were entertained with dance breaks by the talented 4 Hip Hop Pop dancers. The musicians were equally outstanding and the guitarist for Dirty Diana was incredible.

After the interval we were treated to some oldies from the Jackson 5 and an acapella version of 'Why' which dispelled the rumours that Robin lip syncs, there was certainly no doubt about him singing live. We weren't disappointed by the Moonwalk during 'Billie Jean' and the whole dance break section under the spotlight.

At the end, Robin does a Free meet and greet for the fans, he said that he would not leave until the last person had had their picture taken. It was a real treat for Luke and such a nice thing to do for the fans as I'm sure after an energetic 2 hour show all he wanted to do was take off the make up and costume and get home!

Making memories with my son is what I love doing best and I think I succeeded, with the help of this stunning performance of the legend, Michael Jackson. We hope Robin returns to Crewe next year, we will certainly be back again!

Check out his website for updates of forthcoming shows
http://www.foreverjackson.co.uk/ 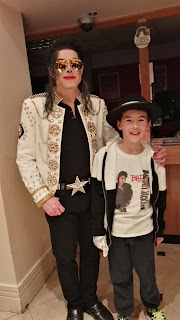 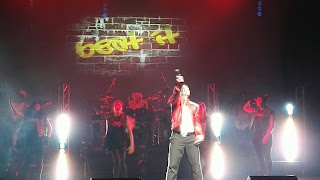