The last 2 weeks have been non-stop, I don't have enough hours in the day or days in the week to fit everything in. Juggling work and being a mummy is getting to be more of a challenge.

I started 2 new classes last week for Baby Sign at Mablins Lane Children's Centre and Shavington Children's Centre. They were both well attended and as a result I have been taken on until further notice at both centres.

Sunday, I was busy with a party for 30 children in Knutsford. The lady booked me for her daughter's 1st Birthday party back in November, now thats what I call organised!

On Monday, I eventually had corrective laser surgery on my eyes. I was very nervous on the journey over to the Trafford Centre and even more so when I was called in to the treatment room. I won't go into details about the procedure but the operation was less than 10 minutes. When the anaesthetic wore off I was feeling very uncomfortable but after a couple of hours in bed, I was up and about with near on perfect vision.
After a morning of resting on Tuesday, I returned for my Post Op check up and was told I had 20/20 vision. What a relief and how exciting to be able to throw my glasses away.

I booked to have a stand, Facepainting at Nantwich Show on Wednesday which was a complete washout. Not only did I have the weather to battle against but Cheshire East had a marquee with someone offering Free Facepainting! How was I supposed to compete with that? I am staying optimistic that 'Hullabaloo Kids' was on the programme and that I may get a party booking off the back of it.

Luke has been here, there and everywhere the last 2 weeks and we are beginning to feel the affects. He is forever pushing boundaries and the 'Time Out' mat has re-appeared after being hidden in the back of the drawers. I haven't been able to spend time with him being a mummy and instead have been up to my eyes in paperwork and replying to emails.

After this morning's classes, I made the effort to have some quality time with Luke and focus on just being a mummy. We had a nice relaxing afternoon without one tantrum in sight.
Posted by Sharon at 23:44 No comments:

To register your space contact me and I will pass your details onto the relevant centre. Or feel free to just pop along.
Posted by Sharon at 17:28 No comments:

Most Toddler & Baby classes stop during the holidays, my Nantwich Baby Sign class however will carry on throughout the Summer and I will be running a few workshops for Tippy Toes:-

Each workshop costs £7.00 per child including snack and drink. Held at the Wesley Centre in Sandbach.

Monday 2nd August - 10.00am – 12.00pm
WALKING IN THE JUNGLE
We will be making animal masks from the ‘Walking In the Jungle’ book.
Learning how to move like the animals during Story telling, then we will sing and dance and put on a mini show for the parents.

Monday 9th August – 10.00am – 12.00pm
THE GRUFFALO
We will be making Gruffalo masks to use during our Gruffalo Story.
Play Gruffalo themed games ie/pin the wart on the Gruffalos nose and
We will perform our Gruffalo choir in our mini show for the parents.

Monday 16th August – 10.00am – 12.00pm
PRINCESS & PIRATES
We would like all girls to dress up in their favourite princess dresses and all boys to dress up as pirates. Facepainting will be provided.
Our story telling will take us on a treasure hunt to find the missing treasure and themed party games. 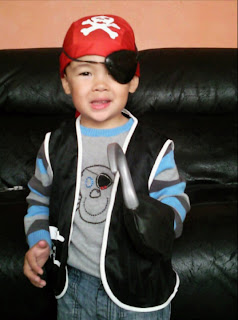 After Luke wanted his pirate jumper on, his pirate socks on and to play with his pirate toys, we aptly named today 'Pirate Day'!

I bought a Pirate costume from 'George' last year for a couple of pound and just knew it would come in handy at some point, I'm amazed I managed to keep it hidden until today.

Luke spent a couple of hours this morning at his Grandparents while I ran a Tippy Toes class in Sandbach, then we came home, had a Pirate Lunch and then made a Treasure Chest out of an old shoe box and some treasure too. He loved being all grown up and drawing his own shapes and cutting them out himself.

Another fantastic day!
Posted by Sharon at 16:36 No comments:

SOMETHING FOR THE WEEKEND

My busy weekend starts tomorrow with facepainting at a Nursing home in Winsford. I don't have any childcare, as my backup is going to Chester for the day so Luke is coming too. It's been a while since he came to work with me so I'm keeping my fingers crossed he will be able to keep himself amused for an hour.

At 6pm, the new Community Centre in Stapeley, Nantwich is having an open evening and have invited me along to promote my classes.

Saturday is Nantwich Fun Day, I will be running the usual Tippy Toes class at 9.15am, then off to set up for Nantwich Fun Day. I will be painting faces from 10am till 5pm.
The weather is not looking too promising at the moment so hopefully will brighten up.

Sunday is Stapeley Water Gardens Birthday Celebration, so I have been booked to facepaint at the Palms from 11am till 4pm.

Its a good job I've had some quality time with Luke this week as I'm certainly not going to see him at the weekend. He will enjoy spending time with Daddy and has a party to go to which will keep them both entertained.
Posted by Sharon at 16:24 No comments: 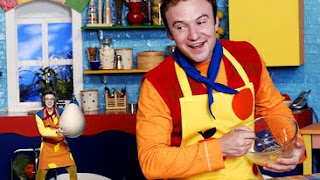 Since Luke moved up to Pre-school he is the happiest he's ever been at nursery. He runs in without a blink of an eye and has settled in so well. He started at Nyehome, Nantwich at 9 months and cried virtually every week he was there, until now. He is much happier which makes it easier for me too.

This morning, Luke announced he wanted to go on a bus in the afternoon after nursery. This was due to seeing our friends, Anne-Marie & daughter Jaime jump on the bus yesterday. I decided against Crewe Town centre so went the opposite direction taking the C84 to Tarporley, where I spent my teenage years and attended Tarporley High School. The excitement of being on the bus wore Luke out and as soon as we got off, he fell asleep! This gave me the opportunity to walk round a few shops in the High Street, many of them don't have pushchair access and sit and have a quiet coffee.

When we came home, we started on the dinner, homemade lasagne. Luke has always had an interest in cookery and one of his favourite programmes was 'Big Cook, Little Cook'. He insists on helping so today for the first time, I gave him a plastic knife and the mushrooms to slice (which he did perfectly) then he helped to lay the lasagne sheets and grated and sprinkled the cheese on top. I then sliced the french stick and let him mix the garlic, parsley and butter himself and spread on the bread. He was so very proud of himself helping to cook dinner and couldn't wait to tell Daddy all about it.

I am so grateful for the time I get to spend with Luke but also that when I am working he is being well looked after. He gets the best of both worlds and so do I.
Posted by Sharon at 22:48 1 comment:

The weather has been exceptional the past couple of weeks with only 2 days of rain, the rest sunshine. With this in mind, why did I have to catch a cold?! I almost certainly caught it from Luke but mine has lasted well over a week and his, a few days!

The timing couldn't have been worse, especially as today, I should have been going for corrective eye surgery in Manchester. I was hyped up all week but yesterday I had to cancel the appointment due to fever, sore throat and cough. It has been re-booked for the end of the month so I will be keeping germs at bay. Fingers crossed!
Posted by Sharon at 22:34 No comments: