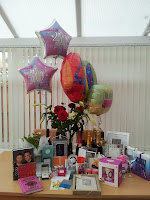 The weekend was one of celebrations. I had my 'Full Length & Fabulous' 40th birthday party on Saturday, (ball gowns and Tuxedos) held at Nantwich Football club. It was a night I will always remember.

Mark & I had a dance lesson with Caroline Coles from 'My Wedding Dance' and we performed it on the night to a surprised audience. He did me proud and soon relaxed into it half way through.

It was wonderful to see all my family and friends together again and just made me realise how lucky I am to have these people around me. My own little pride and joy wasn't around on the night, with starting school we thought it would be too much for him to have such a late night. However, he had a fab time with Alison Bowett, Nantwich Childminder and slept fantastically well.

I have been totally pampered and spoilt, I've had over 10 bottles of champagne, beauty treatments, money and gorgeous gifts. 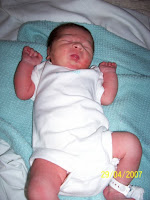 It only seems like yesterday when I took this photo of Luke when he was a day old, that was 4 and a half years ago. My big boy is starting school full time tomorrow, its the day I've been dreading for ages. My baby is grown up and going to big school. I purposely put off taking any party bookings this weekend so Mark, Luke and I could spend some quality time together. Yesterday we went to Chester Zoo and today we spent time playing at home and getting organised for the big week ahead.

Mondays have always been 'Luke and Mummy days' and we have spent them together at the library, at the park, swimming, playdates, at playbarns, with Grandparents or just having lazy days at home. Tomorrow I'm going to be at a loose end and I will feel lost without my sidekick.

On my radio show each week, I end with Bay City Rollers 'Bye Bye Baby', I will be singing this tune in my head tomorrow. I will definitely be taking the tissues with me for the journey home from the school run.
Posted by Sharon at 22:21 No comments:

Who'd have thought that a year ago I would be presenting my own radio show? I certainly didn't, and after a year, I still find it difficult to call myself a radio presenter.

Over the past year I've networked with some fantastic businesses and joined forces with the award winning photographer, Simon J. Newbury on our Pregnancy Bump Paint & Portrait Project. This led to us appearing on Granada Reports as well as all 3 of the local newspapers.

I feel so fortunate to have been given the opportunity to have my own show on the radio and here's to another year!

HAPPY BIRTHDAY REDSHIFT!!!
Posted by Sharon at 21:17 No comments: 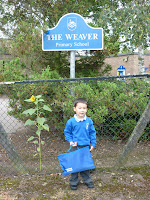 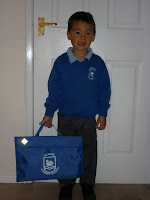 This time last year I was applying for school places for Luke, and ever since then we have been telling him that he will be going to big school soon, not sure if I was preparing him for school or myself! Well, that day was today. Sob sob!

Most of his friends started yesterday but today was Luke's first day. I felt nervous and had butterflies all morning, I was careful not to be too over enthusiastic and careful not to show him I was petrified for him too! My bottom lip was quivering on the short walk to the Weaver school which was made worse when I bumped into a friend who asked 'How are you feeling?'.

Luke's friend, Lewis was already at in the classroom, so I told him to look for Lewis and in he trotted, he turned round, waved and shouted 'See you later!' without a backward glance. Luckily, Lewis's mummy, Heather was with me so we walked away from the school and didn't shed a tear at all!

When I picked him up he was full of it but when I asked what he had been doing he told me 'I can't tell you, its a secret'.

I'm keeping fingers and toes crossed that the rest of his taster days will be as smooth. I think the real tears will come on 19th September when he goes full time 9am till 3pm, and I don't mean from Luke!
Posted by Sharon at 14:03 No comments: