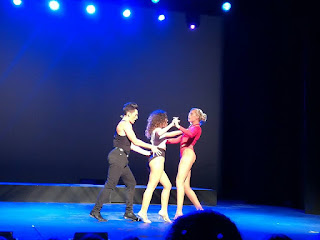 In my eyes Dirty Dancing is the Ultimate feel good movie, it has great songs, romance and lots of dancing. Last night I spent the evening at the beautiful Crewe Lyceum watching 'A Night of Dirty Dancing', the ultimate tribute show.

I didn't know what to expect but the show had its own storyline and also retold the original story. Baby and Johnny were sizzling on stage, one of the scenes was very sexy! The dancing was brilliant and I know how tricky it is to dance on that stage, the steep is horrendous! The leads were strong with their solo songs and had the audience hooked till the end.  There was lots of banter with the audience and especially when there was a technical fault with the lights. 2 of the cast did so well ad-libbing to keep us entertained.

The show was comical and entertaining and it was a great way to spend a rainy Wednesday evening.
It was a must-see for any Dirty Dancing fan! Go to the fanpage on Facebook for more details:-
https://www.facebook.com/ANightOfDirtyDancing/?fref=ts 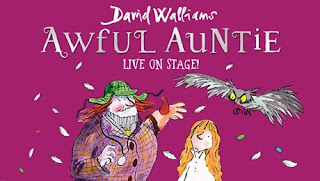 Luke has always loved the David Walliams books, we read Demon Dentist together but he generally reads the books with daddy. As I knew I was coming to see Awful Auntie I thought I'd better speed read it myself and finished it in 3 days. I went with two 10 year olds and his biggest fans, it was nice to hear them discussing how it would be portrayed on stage.

The story is set in Saxby Hall owned by Lord and Lady Saxby and their 12 year old daughter Stella. After a visit to London with her parents, Stella wakes up to find her 'Awful' Aunt Alberta is caring for her and that her life is in danger. With the help of a ghost and a very large owl Stella fights for her life and manages to outwit her Aunt.

The larger than life Awful Auntie was played by Timothy Speyer, he was a comical but also quite menacing at times. The scene where Stella and Soot played tricks on Aunt Alberta was slapstick and had us belly-laughing.

Georgina Leonidas played Stella Saxby, Luke was most excited that she had been in the Harry Potter movies and also voiced a part in the video game. The banter between the posh young lady and 'cockney' Soot (Ashley Cousins) was funny and they had great chemistry. The revolving scenery and the car chase was absolutely fantastic.

Aunt Alberta's sidekick was Wagner the Owl, he was a life-like puppet controlled by Roberta Bellekom. Gibbon the butler was Richard James, he is exactly how I had imagined him to be from the book. We giggled as soon as he walked onto the stage as we knew he was going to do something ludicrously funny.

Birmingham Stage Company did a fantastic job and Neal Foster captured all the elements of the book and there was only a few adaptations which we reviewed on the journey home. I can't remember the last time I saw something at the theatre without them breaking out into a song and dance. Maybe that is something Mr Walliams might consider doing next! Mr Stink the Musical perhaps?

Click on this link for tickets to the Regent Theatre, its on until the Saturday and its less than 2 hours with an interval so not a late night for the little ones.