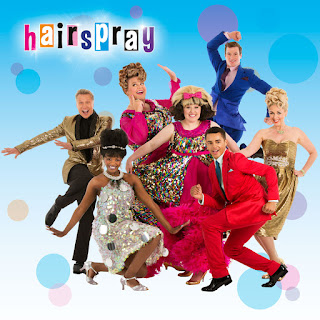 The award-winning Musical, Hairspray is in Stoke for the first time ever, it's a musical I'm familiar with and love many of the songs and the storyline.

It's set in Baltimore in 1962 where a larger than life teenager with big hair and big personality, Tracy Turnblad (played by Freya Sutton) dreams of dancing her way onto national TV. She soon becomes a local star and uses her fame to fight for equality and changes the rules that black dancers are allowed to join together on The Corny Collins show. Freya played the part fantastically, with a great voice and comedy which had the audience laughing out loud in the first half. Tracy's love interest, Link Larkin was played by Ashley Gilmour and portrayed a slick, heartthrob with great charisma.

There were great comedy moments between Tracy's mother, Edna played by Matt Rixon and her father played by Peter Duncan. I never even knew Peter was a performer! It was a pleasant surprise and a nice pairing.

Dex Lee as Seaweed impressed with his slick moves and the bedroom scene with Penny Pingleton (Monique Young) was hilarious. Duane was played by Layton Williams from Bad Education wowed us with his flips.

Claire Sweeney is Velma Von Tussle, the bitchy producer of The Corny Collins show and pushy mother of Amber who she wants thrusts in the limelight. She was brilliant and hilarious when she was clambering over some unsuspecting members of the audience in the stalls. Her daughter, Amber was played by Lauren Stroud, with such a beautiful face, voice and talented dancer.

Brenda Edwards is cast as Motormouth Maybelle, she was an X Factor semi-finalist and a real powerhouse, I felt so emotional watching her especially as I saw her being interviewed on Loose Women a couple of weeks ago talking about her current battle with breast cancer and had chemotherapy only days ago, what an absolute inspiration and strong lady.

The whole cast deserved the standing ovation at the end and the audience were clapping and singing along. A real feel good musical that you should definitely not miss the opportunity to see whilst its in Stoke!

Tickets are still available until Saturday 14th May