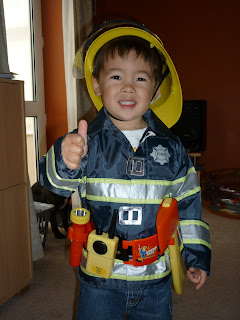 It was a difficult decision deciding where to take Luke for his 3rd Birthday outing. For his 1st birthday we went to Blue Planet Aquarium, then last year was Chester Zoo, this year we decided on Knowsley Safari Park. For the first time in 3 years, the weather was actually kind to us, which may not have mattered too much as we were sitting in the car. The animals were not shy and the lions enjoyed themselves a bit too much in front of us, we didn't know where to look!!

The baboons were especially funny and luckily didn't break off the aerial or wing mirrors. We probably had about 5 baboons on the car at one point and Luke thought it was hilarious. There is a 'monkey friendly track' which takes you in a jeep but we thought it would be a nice surprise for Luke to see them climb onto the car.

Luke's favourite programme at the moment is 'Fireman Sam'. He is forever putting fires out and now has most of the Fireman Sam books and accessories. Last year, it was Thomas the Tank Engine but I think Fireman Sam is staying with us for a bit longer yet.
Posted by Sharon at 14:32