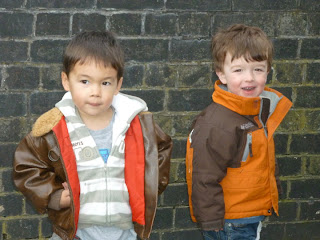 Luke and I had another playdate on Friday, with Ali & Isaac who we met at Cronkinson Farm Baby Group, when our little ones were just a couple of months old. We usually just have a play round at each other's houses but thought we would venture out of Nantwich, have lunch and a cheeky glass of wine.

We took the 11.06am train from Nantwich to Crewe, the boys were very excited waiting for the train. It was a 10 minute walk to the Brocklebank pub on Weston Road from Crewe Railway station. They have a play area which is free with a ball pool, spiral slide and lots of opportunity for the children to climb. The outdoor area is equally as good and the sunshine helped again.

We had lunch (2 meals for £9) and had planned on getting the 13.26 train back to Nantwich. However, we were very relaxed as the boys were playing so well and the wine was going down nicely! The next train was 15.26 but we were able to keep them both entertained to get the later one.

I recommend the Brocklebank if you want a nice pub meal and a great play area for the children. We had a lovely day and Luke hasn't stopped talking about it.
Posted by Sharon at 20:57