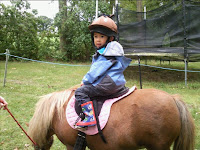 I've been on a bit of a mission to get Luke to take up a hobby and just recently we've tried swimming lessons, gym sessions and football, all of which have been unsuccessful. I was stressing myself out by his lack of enthusiasm for everything and worrying that he would never settle into anything.

Alison Bowett, who runs Nantwich Baby Group organised an outing today to Cheshire Pony Parties, I booked Luke onto it but did not anticipate him taking part. He loves animals in general but recently in Majorca he refused the opportunity to ride a pony so I didn't expect too much.

Luke was adamant he wasn't going to ride one, and just wanted to look at them. When we first arrived, each child was handed a brush to groom Poppy the pony. Luke was very tentative at first but by the time we were introduced to the second pony, Maisie he was getting into it a bit more. Luke loves being a little helper so was thrilled when he was invited to help find the ribbons and clips to decorate Maisie's mane. Then he held the lead and walked round with Maisie, but still absolutely adamant he wasn't going to ride one.

We queued up to just have a photo sitting on Poppy and still he kept saying 'I'm just having a sit, not a ride' but as children always prove you wrong, he sat and then was led round. I was thrilled to bits, not only because I was getting my monies worth but because I knew he would love it. Last year, he'd ridden on a donkey and loved it. It's not as cheap as football or swimming lessons but I may have found something that Luke enjoys!

For more details on Cheshire Pony Parties, go to http://www.cheshireponyparties.co.uk/index.php
Posted by Sharon at 20:18